We recently needed to dig deep into a 60W power delivery design for one of our clients. It showed radiated emissions in excess of FCC class B target and we needed to get to the bottom of it. The pre-compliance work had already been done at E3 in Grand Rapids, so though we weren't present for the testing we had access to the data. At first it looked like a straightforward need to add a common mode choke to the input. Further investigation on the bench with nearfield probes showed a very sharp spur at 49MHz and several harmonics coming directly from the NCP81239 buck boost chip we use as a power supply.

Near-field emissions from NCP81239 on On-Semi reference design board

This supply is tailor-made for USB type-C power delivery because the output voltage is controllable via I2C. Since PD requires adjustable output from 5 to 20V the I2C interface provides a lot of flexibility.

So back to the 49MHz spur – It’s unusual to see this kind of frequency coming from a power supply chip. It’s usually the kind of emission you see from a micro or clock generator. The characteristics of the emission indicate that the source has a 49MHz fundamental frequency, that the waveform is asymmetric, and the rise time is probably > 3ns.

How can I tell that?

Normally in a power supply you look for high megahertz noise caused by ringing at the switch-node or in the gate drives. All these looked clean.

I contacted On-Semi to see if there was some hidden clock feature that's not mentioned in the datasheet. They pointed me to their reference design and told me I must have done something wrong. Fortunately, I have the reference design board. It has the exact same emission. Since the signal is not being generated by FET switching, it indicates that it is coming from inside the chip.

I thought I would take a look at the decoupling cap for the chip. For the chip internal logic to be driving something that hard it needs a low impedance power source - i.e., the decoupling cap. I looked at the voltage across the cap and sure enough, there was the asymmetric 49MHz waveform.

Next step was to try limiting the bandwidth of that supply. I placed a ferrite bead in series with the decoupling cap and voila! - no more noise across the cap and no more nearfield emissions from the chip. Impedance of the cap was still low enough at lower frequencies to stabilize the internal LDO, but damped at high frequency to prevent the internally generated noise. 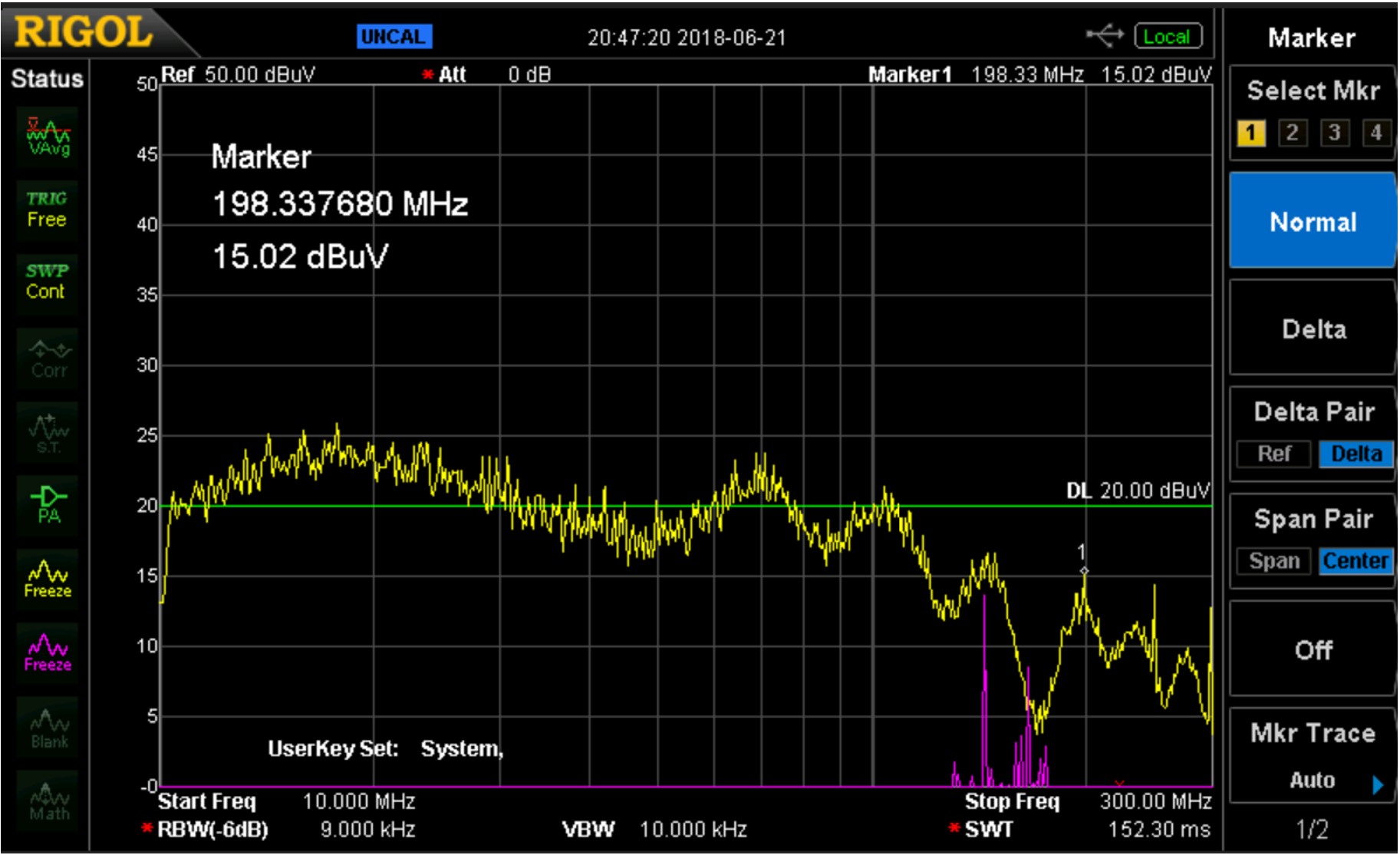